[generic] What are we running and playing?

#202
Massive Swade fan, as well as Lords of Gossamer and Mutants and Masterminds

#203
@Guvnor - including last night, I have us at nine sessions of CoC this year

A fairly slow and steady of year of gaming -- highlights being playing in Masks of Nyarlathotep (about to start Session 38 of this tonight), and running Pirates of Drinax.

#207
FortiterGames said:
No idea how you do your exploding pie charts as my Excel-fu sucks
Click to expand...
I did mine in Python/matplotlib for nerd reasons.

But do them in Excel, right click on chart and select format data series: 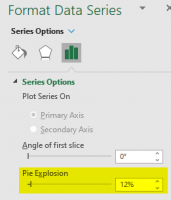 Edit: To add the data labels, right click on the Chart, click 'Add Data Labels', then right-click again, 'Format Data Labels', and change the tick box from Percentage to Value

#208
After a week on hiatus, Apps returns with session 7, which mostly took place in a carpark with characters talking... the production company obviously saved a lot of money here!

Elyse decides she has had enough, destroying Mia's dossier of supernatural evidence and arguing for going back home to Germany... partly because Elsye's player had selected an advance option which allowed her to change playbooks, going from the clingy Zeppo to the angry Denier. After much debating and some emotional blackmail, the party splits, with Hadrian, Elyse and her brother Robert deciding to ignore things and go back west, while Mia, Gregory and Mitchell/Daisy keep heading east, either from curiosity or duty.

The session was topped and tailed by some flashbacks to rural Russia in 1894, where a young peasant girl and her large wolfhound companion are playing in the woods, before being called back to the village by an older woman, who shouts out the names "Molotok! Yury!" over and over. As the two playmates approach her, the girl reprimands her, saying "Mother! Don't use that name! I am Sonechka," at which the woman angrily tears off the girl's hood to reveal the short shorn hair of a boy and says "Yury, you have been told not to dress that way!"

Trail (Armitage Files) is getting close to a conclusion—three more sessions, it would seem.

And, I started running my own game—a campaign no less. Last year, all one offs. This year, four sessions into Impossible Landscapes. A four adventure campaign with knobs on, I'm running 2 hour sessions, so this could go on for the rest of the year.

#210
paulbaldowski said:
A four adventure campaign with knobs on, I'm running 2 hour sessions, so this could go on for the rest of the year.
Click to expand...
And last night, I ran my first ever parallel gaming thing—session 4 ended with off-kilter timeframes, so I ran a 1-hour one-on-one with a player so that we could start session 5 with some semblance of together-ness. I don't know what's happening anymore...

Staff member
#211
Isn’t that the point, once Carcosa gets involved?!

#212
Dom said:
Isn’t that the point, once Carcosa gets involved?!
Click to expand...
We haven't finished the first adventure yet!
We're just stumbling across the night-time activities and peculiarities of the McAllister Building. One character went to Patience to pursue a lead; three went to the root in the middle of the night; one made it and then went looking for his companions, but—in turn—uncovered some architectural inconsistencies in Vanfitz's apartment. That was the hour session—skimming the library.
P

Even better, was that we met in person!

Even better, was that we met in person!
Click to expand...
Woohoo!

I am starting to work on my very old fantasy map of 'Kalland' with a mind to get a campaign running there, and either 4e or True20 look to be the main system contenders.
Last edited: Jun 19, 2021
P

I am starting to work on my very old fantasy map of 'Kalland' with a mind to get a campaign running there, and either 4e or True20 look to be the main system contenders.
Click to expand...
She’s going to run some of the modules starting with Keep on the Shadowfell but i’m not sure if it’s going to be based in Nentir Vale or Forgotten Realms.

Staff member
#216
Pual said:
She’s going to run some of the modules starting with Keep on the Shadowfell but i’m not sure if it’s going to be based in Nentir Vale or Forgotten Realms.
Click to expand...
I have to say I really like the Nentir Vale, the points of light and the slimmed down mythology of 4th edition.

Staff member
#217
Guvnor said:
I have to say I really like the Nentir Vale, the points of light and the slimmed down mythology of 4th edition.
Click to expand...
It is so accessible and easy to run. 4e all round.

Staff member
#218
Pual said:
She’s going to run some of the modules starting with Keep on the Shadowfell but i’m not sure if it’s going to be based in Nentir Vale or Forgotten Realms.
Click to expand...
I look forward to seeing some game reports over here!

#219
Episode 8 of Apps (to be renamed Haunts) sees the party split across international borders, with Robert, Elyse and Hadrian head west back to Germany, while Gregory, Mia and Daisy proceed onwards, heading towards Russia.

Arriving back at the apartment she shared with Mia, Elyse begins to trash Mia's files, also incidentally destroying some of the mementoes that had collected during their time together; meanwhile, Hadrian warns Robert to stay close to his sister, as she is about to go through a very hard time...

In the car heading east, Gregory unexpectedly discovers a talent for turning invisible (clearly something to do with his recent experience of dying and coming back in the body of Everett) after Mia clumsily probes the past shared by Gregory and Daisy. Luckily, Elyse calls to thrash out the remains of her relationship with Mia, but the signal breaks up as the car travels further into Eastern Europe; eventually, Elyse loses the connection, but from Mia's perspective, the call continues, until a snarling voice tries to command her to seize the steering wheel and crash the car!

Back in Germany, after some rest, Elyse awakes the following morning to visit the pharmacy and, with Hadrian's caution weighing on his mind, Robert accompanies her: on the short walk down the road, Elyse encounters an eyeless spectre at a pedestrian crossing, a burning WW2 bomber arcing across the sky above, a building densely covered in cobwebs and a chorus of voices whispering the word "sick" over and over inside the pharmacy. Her attempts to ignore this cause her to space out so hard that Robert has to shake her to snap her out of it; she responds by lashing out at him and running out of the pharmacy. Pursued and confronted by Robert, Elyse breaks down and confesses that she is seeing things... which triggers a special move, enabling Robert to share in her visions for a brief time.

Across the Russian border, Daisy has parked the car up after a very long drive and turns to Gregory to brief her on what they are heading into: a place known as 'The Bottle', where the dead do no pass on but linger in this world, trapped there as playmates of Sonechka. The only way to liberate their dead classmates is to find a way to smash the Bottle, but as they too are dead, doing so will also sever their tether to the mortal world. As Daisy confesses this, she moves closer to Gregory and their hands entwine, reigniting some long buried feelings; a clueless Mia wonders whether she should take a walk and leave them to it, but before she can do so, camouflaged troops break out of cover, surrounding the car and demanding everyone get out (an epic missed roll at just the right moment triggered this unplanned for cliff hanger.)

Finally, we closed with another flashback to rural Russia 127 years ago, where the peasant mother is trying to protect her trans daughter, but too late: the door to their cottage crashes in and a small, armed mob demand, "Give us the witch!"

June was the lightest RPG month, with 6 game sessions. March is the clear winner, with 13 sessions.