Ptolus for Cypher and 5E – through Mon 06 June

Through Monday, June 6 we present the Ptolus Cypher Bundle, with the new Cypher System and D&D 5E versions of Monte Cook‘s famous City by the Spire, Ptolus. In the shadow of an impossibly tall stone column, the sprawling city of Ptolus sits atop ancient dungeons that draw adventurers (“delvers”) from across the land. Humans, dwarves, elves, and halflings rub shoulders with leonine littorians, winged cherubim, and even centaurs and lizardfolk. Magic is everywhere; intrigue and treachery abound; someone always needs to hire adventurers to face bizarre chaositech abominations, the fearsome wintersouled, or dangerous soul magic. Delve the endless dungeons and, when you’re ready, ascend the Spire to confront an ancient and restless evil. Originally published to critical acclaim for D&D 3.x — it was based on Monte’s own Third Edition playtest campaign — the 2006 Ptolus: City by the Spire was the greatest flourish of his career to that time. With 350 illustrations and more than 100 color maps, the book’s size matched the grandeur of its production. We presented the 3.x version in September 2014 (predating this blog) and again in May 2016. Now Ptolus thrives again in new versions for Fifth Edition and the Cypher System, funded in a spectacular February 2020 Kickstarter campaign. As before, the Ptolus core campaign setting book is lavishly produced, with abundant maps and illustrations, multiple indices, heavy cross-referencing, hyperlinking and bookmarking, and quick-access summaries. With this single book, and the play aids in this bargain-priced offer, you can take starting player characters all the way to epic play — twice over. 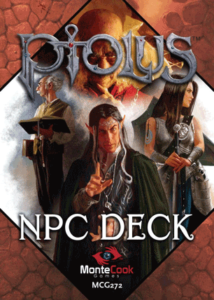 Ten percent of your payment (after gateway fees) goes to this Ptolus Cypher offer’s pandemic-related charity, Direct Relief. Direct Relief sends protective gear and critical care medications to health workers, with emergency deliveries to medical facilities across the US and to regional response agencies across the world.

Want more Cypher System? Check our new Cypher 10A Megabundle, marking the tenth anniversary of the founding of Monte Cook Games with a giant offer of games, sourcebooks, campaign settings, and play aids including Numenera Discovery, The Strange, four genre sourcebooks, and four Worlds of the Cypher System.

This new Ptolus Cypher offer climbs the Spire and disappears, together with the Cypher 10A Megabundle, Monday, June 6.

#2
Gosh. This is a lot of Cypher. I resisted the Ptolus kickstarter, but maybe I will explore via Cypher now? Lots.

#5
Ptolus Cyper is really good for fantasy lore in the city. Because Cypher is so rules light, less space is filled by stat blocks.

#7
Can we get some Cypher.Ptolus play in? I fancy some rules lightish city play.