Through Monday, August 16 we present the all-new Warlock Bundle featuring Warlock!, the old-school FRPG from Fire Ruby Designs inspired by the early days of British roleplaying. Ready your warhammer for rules-light adventure in the dark yet wondrous spirit of early Games Workshop and the Fighting Fantasy gamebooks.

For many UK roleplayers in the 1980s, Games Workshop’s Warhammer Fantasy Roleplay First Edition was a gateway drug. It’s interesting how, for all that WFRP 1E dominated that era in Britain, relatively few indie retro-clones try to emulate its mechanics. Where hundreds of Old School Revival fans have cloned every edition of D&D with varying fidelity, WFRP tributes tend to use other rules systems to emulate the Old World setting’s distinctive atmosphere. The 2011 kitbash Small But Vicious Dog (named for the Rat Catcher’s indispensable terrier) reskins B/X D&D as a platform for, as designer Chris Hogan put it, “drugs, diseases, insanity, mutation, gunpowder, chaotic magic, dorfs with mohawks, hot pies, giant angry puffins, and so forth […] a witches’ brew of Bosch, Durer, and Doré, Mervyn Peake and Tom Sharpe, Blackadder, The Young Ones, pints of bitter, cheap weed, Iron Maiden, and The Damned.” Among these spiritual successors, Fire Ruby’s Warlock! stands out for its light-handed, not to say “stark,” approach. Designed by Greg Saunders (Golgotha, Summerland, Exilium), Warlock uses a unified 1d20+skill mechanic that adapts easily to published grim-and-perilous adventures and helps you create your own new stories. Warlock careers match WFRP‘s almost one-for-one. Combat is deadly, magic is low-power (though accessible to all characters), and everything — and everybody — is easily hackable. Concise sourcebooks have fleshed out the sketchy background of the game’s default setting, the Kingdom, and two Compendium rules expansions add gunpowder, sanity, and other Old World concerns.

In a detailed Reviews from R’lyeh rundown, Matthew Pook concludes, “The danger of being inspired by Warhammer Fantasy Roleplay and Fighting Fantasy is that Warlock! could have been fairly complex, but in taking concepts and structures from both — the Careers in particular of Warhammer Fantasy Roleplay and the simplicity of Fighting Fantasy — the result is something leaner, faster, but still as brutal and as grim. It is light enough for the Game Master to easily develop her own content. Overall, Warlock! is easy to pick up and play, presenting a quick and dirty fantasy roleplaying game that will tick many a gamer’s sense of nostalgia.” 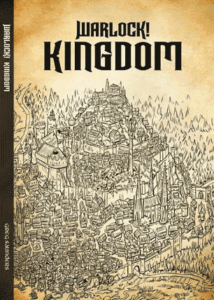 This comprehensive offer presents almost the entire Warlock! line, including rules, locations, bestiaries, characters, and scenarios — everything you need for adventure in the 1980s British style. Pay just US$7.95 to get all four titles in our Starter Collection (retail value $28) as DRM-free .PDF ebooks, including the complete Warlock! core rulebook, the location sourcebooks Kingdom and Griff’s Vale, and the scenario collection Three’s Company. And if you pay more than the threshold (average) price, which is set at $14.95 to start, you’ll level up and also get our entire Bonus Collection with six more titles worth an additional $42, including both Warlock Compendium 1 and Compendium 2 rules expansions, the character collection Rogues’ Gallery, the Phantasmagoria bestiary, the recent adventure Bridgetown, and the descriptively named Goblins.

Ten percent of your payment (after gateway fees) goes to this Warlock offer’s pandemic-related charity, Direct Relief. Direct Relief gets protective gear and critical care medications to health workers, with emergency deliveries to medical facilities across the US and to regional response agencies across the world.

This Warlock! Bundle dissolves in the inky darkness of its unknowable otherworldly patron and vanishes Monday, August 16.

#2
Bundle Operator said:
It’s interesting how, for all that WFRP 1E dominated that era in Britain, relatively few indie retro-clones try to emulate its mechanics.
Click to expand...
Might I suggest that's because they're bloody awful? Fantasy isn't really my thing but I rather like Warhammer's Old World setting. There's no way though that I'd want run or play a game using the original system's myriad of fiddly stats and low percentiles - GW should have called it Whiffing Hammer.

Staff member
#3
I think Greg mentioned that part of the motivation to write Warlock! was to run in the setting without using the game.