Other Games A review of Bounty Hunter TTRPG (geekstable)

#1
Bounty Hunter TTRPG is a space opera, action adventure RPG by Guy Sclanders of How to Be a Great GM, published by Geekstable Ltd.
https://www.greatgamemaster.com/dm/product/bounty-hunter-a-ttrpg-combo-pack-pdf/ 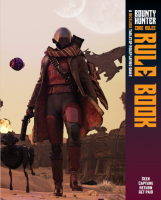 Context: this review is based on:

I signed up for the North Star game because, well, the game was called Bounty Hunter. As a long-time fan of Strontium Dog, I’m always up for bounty hunting goodness. And con games are great for trying out new systems with a bunch of people who have bought into the concept of 3 or 4 hours of streamlined fun. The icing on the cake was Guy’s offer of sending all the players a pdf copy of the Core Rules before the game, so we could have a read through and think about character concepts.
I was a bit twitchy about it being a diceless system, as I’ve played a couple of diceless games in the past which were kind of clunky and you sometimes had to fight the system to get to the fun (Faith and Everway).

THE GOOD
I’m really impressed by Bounty Hunter. So impressed I bought the dead-tree version and have plot bunnies breeding scenario ideas to run and potential characters I could play (if I can persuade any of my regular groups to run it). The RPG is very tongue in cheek in places and has a lovely sense of humour – like you can go for a cuppa in a Coffeffee shop and the language of sentient AIs is called Zerone.
We did character gen as part of the online session. It took about 20 minutes for the whole party to get from saying hi to roleplaying. That’s fantastic. It only took that long because there were a few tables to read through to make choices about your species, background (birthright), education, etc.
The session itself was a nice high-action start, followed by a bit of investigation, then some double and triple crossing by NPCs. Towards the end we had an almost farcical piece of miscommunication amongst the PCs resulting in a suboptimal party split – the only person who could fire the ship’s guns (me) was on the planet not on the ship, so the pilot had to keep leaping from the pilot’s chair to the gunnery station! Little moments like that, and character interactions such as the NPC robot getting all huffy when a PC insulted it, really added to the atmosphere. The session was, to steal Savage World’s tag line, fast furious fun.

The System
The core mechanics are this: you have 20 action points (APs). If you want to do a thing (pick a lock, shoot a bad guy, fast talk your way past the guard) and you have the skill, then you just spend an action point and you succeed. There is no chance of failure unless the opposition picked has a relevant skill and picked a physical defence (against fighty shooty stuff) or mental defence (against social stuff) as their action. If there is no opposition, such as climbing a cliff or picking a lock, then you just do it. If it is difficult or time consuming – like hacking into the Pentagon – you take several rounds and spend 1 action point in each. Importantly, the GM has to tell you how many rounds it will take before you begin the task: they can’t just be a dick and bleed away your action points by asking for more and more.
If you don’t have the skill, you can’t do the thing. Ever. Apart from punching and kicking, or physical defence by hiding behind cover or dodging/blocking, none of which require a skill.
To start with I was a bit dubious of the idea of a system with no default system, and where the players get 11 starting skills out of a list of 34 skills. However, Guy explained the design ethos and I grokked that this is not to restrict the player’s agency – it is to make you be imaginative, and think outside the box. No Deception skill to fast talk your way past the bouncer? Why not come at the problem from a different angle and use Charm or Stealth instead? Or use Investigate to work out when his coffeffee breaks are! So during the session, when there was an angry alien T-rex rampaging about, we were not just shooting it and stabbing it, we were using Craft to make a trip wire to tangle it in, Engineering to collapse a bulkhead door on it and Wrangling to slow it down by convincing it winter was coming and it ought to hibernate. All these things were whittling away at its action points, or using up its defence actions.
The system also has the concept of a Chained Skill – this is a task which requires several different skills to be done simultaneously, to represent specialist knowledge. For instance you need Computer Acumen + Engineering + Repair and to spend 3 APs to disable your ship’s transponder. The rules say that chained skills will mostly be about starship operations.

Combat was unusual but quite neat. You get one action a round. Drawing weapons and ‘normal’ movement is free, but if you want to climb things or leap over things or swing from chandeliers then that’s a skill action.
Each round has 2 phases: first phase and last phase. To go in the first phase you have to spend 1 AP, as well as the usual AP spend to use a skill. Then everything resolves simultaneously for the phase. So…
Therefore there is a certain amount of tactical thinking going on: if you always go first you’ll burn through your action points like nobody’s business, but if you repeatedly go last you’ll get thumped or shot a lot by bad guys who chose to attack in First Phase. And if PCs gang up on an NPC then one can ‘use up’ the NPCs’ defence and the other can punch/stab/shoot them.
The game (and Guy’s deft handling of pace) delivered an action-packed adventure with lots of tension, despite it being a system filled with automatic successes.
In part that is because your action points are also your hit points. I was playing the team medic and was deliberately making myself a target in our first firefight by causing distractions. So I used a lot of APs doing stuff and also got shot a few times, and was down to 4 APs by the end of the fight. But we did a bit of first aid, and then later had a day’s travel to get to the next planet, so everyone had all 20 of their APs restored ready for the next encounter.
That AP economy is a vital skill for the GM to master. I suspect that miserly GMs who don’t give the PCs enough downtime to refresh their points will end up with a pile of unconscious PCs or the party turtling.

You don’t need the setting book (Huntari Region) to play – there is enough in the core rules for the GM to bolt it onto their homebrew setting or use the Bounty Hunter system for a game of The Mandalorian or Strontium Dog. You’d only need to add a skill for Jedi /Psi Powers which do physical stuff, one for Jedi /Psi Powers which do mental stuff and/or maybe create a Special Ability for mutant/Jedis.
If you do opt for buying the setting book, it has exactly the right level of detail for a fast paced, space opera game. There are lots of things to spark story seeds and get the plot bunnies breeding, without drowning you in infodump. There are 8 playable species, and all of them are found throughout civilised space, so you don’t need to think of excuses convoluted backstory why there is a Klingon in Starfleet!


THE BAD… WELL, OKAY THEN… THE SLIGHTLY CONFUSING
There are quite a few typos in the dead tree books. Most are minor and none prevent you understanding the meaning of the sentences in question. The most annoying error is that in the Huntari Region sourcebook there is a duplicated Locations table for the planets Greyborn and Vaspan III. And by ‘most annoying’ I mean it is no biggie: the GM will have to spend a few minutes thinking up names for Vaspan’s illegal gambling dens and brothels. (More on the brothels later).
A confusing bit which was due to content rather than layout issues is this: are the Rakath sentient microbial colonies of Raak Space in the Huntari Region book the same as the Rakesh sentient microbial colony which is an option for PCs to play in the Core Rules? Is this a proof reading error or a second microbial species? Again, no biggie: the GM can spend about a microsecond making a decision. (Perhaps Rakath is the plural of Rakesh in their language? Sorted.)
The table of languages is needed for character gen, but is a few pages before the chargen chapter starts.
It says in the core rules that other PCs cannot help when you are using a Chained Skill: one person has to have all the individual skills and has to spend all the APs. But in the actual game Guy let us all chip in with individual skills when we were doing stuff on board our spaceship. For instance we hid in an asteroid field by using a chain of Vehicle Operations, Navigation and Stealth, and our pilot supplied the 2 APs and I spent the Stealth one. So does that rule sometime not apply, or was Guy compensating for our less than optimal skill spread during character generation?

AND THE JUST PLAIN WEIRD
Each planet in the Huntari Region sourcebook has a list of locations (which is an awesome resource) that the GM can use as places your target was last seen, or where your contacts hang out, etc. However, those lists contain an awful lot of brothels. Over half the planets listed have brothels in their location tables. Apparently no-one ever goes clubbing, or heads for the casino or the pod-racing to spend their ill-gotten gains, and even the political agitators and folk guilty of corporate espionage never head for the Ecuadorian Embassy to hide out. The criminals in the Bounty Hunter universe are a cowardly and superstitious randy lot.
There are even brothels on the planet of the sentient microbial colonies, which do not use sexual intercourse to reproduce. Of course, as soon as I read that, my inner biologist went down a rabbit hole and tried to work out what would go on in a microbial brothel. I mean bacteria do have sex (swap genes), even though they don’t have sex (copulate). One microbe from the client touches one microbe from the sex worker and useful genetic sequences are exchanged. Phwoar, look at the extremophile DNA on that!
I only mention the brothels because I’ve gamed with a few (male) GMs who insist on saying “The place is full of scantily clad women” when a scene takes place in or near a brothel. Really? Scantily clad? I’m shocked. Whodathunk? It is so. Fekking. Tiresome. They never mention that the police station is full of people wearing police uniforms or the boardroom is full of people in expensive suits. They never mention scantily clad male sex workers.
Or scantily clad microbes!

#2
I was in that game and it was great. I'm looking forward to getting my hands on a printed version somehow

#3
Vodkashok said:
I was in that game and it was great. I'm looking forward to getting my hands on a printed version somehow
Click to expand...
You can get a printed version from the Great GM website. That's where I got mine.
Printed version: https://www.greatgamemaster.com/dm/product/bounty-hunter-a-ttrpg-combo-pack-physical-book/